AGBU Letter of Appeal to U.S. State Department Regarding Armenia

As you are aware, the sovereign Republic of Armenia is at a critical crossroads. The recent attack by Azeri forces on the Armenian side of the border with Azerbaijan marks a new low in the lengths to which Azerbaijan is willing to go to advance its expansionary ambitions in the region and resolve its disputes over the Nagorno-Karabagh issue through brute force rather than across the negotiating table.

As you recently alluded to yourself, Azeri President Ilham Aliyev has crossed the line of the international order by aggressing against Armenia on its own soil, shelling innocent communities and killing significant numbers of Armenian defense forces responding to what is clearly an invasion of a sovereign nation.

Should the distractions of the day cause the international community to fail to take swift and united action to hold Azerbaijan accountable for this clear violation of international norms, then the victory will belong to the despots and bullies of this world. It will send a signal that it is simpler to solve messy and complex issues between countries by the might of the proverbial sword versus the reason of the pen.

When Putin’s forces invaded Ukraine last February, the United States led the international community on a mission to sanction the Russian state and muster all its diplomatic and military resources to come to the aid of the Ukrainian people. Yet for Armenians, there was the inevitable disappointment that such international solidarity and magnanimity were not afforded to the Armenians of Artsakh back in September 2020, when the Azeri government launched a high-tech war against innocent communities, unleashing a humanitarian catastrophe and a litany of war crimes now under adjudication in the World Court.

Azerbaijan has shown its hand. The question is whether the world has learned from past Armenian history that arbitrary applications of national values and principles is an invitation to predatory nations to flout the rules of international engagement with impunity. Support and protection cannot be meted out selectively on a sliding scale of national self-interest.

The Armenian government has called upon its regional allies to live up to their treaties to ensure the territorial integrity of their nation, but it is not clear if their other distractions and priorities will usurp these agreements. This leaves Armenia isolated and its security in imminent threat.

Armenia is a developing democracy. Our religion, language, music, and artistic and architectural achievements are truly unique in world civilization. Moreover, the preponderance of Armenian intellectuals, artists, musicians, scholars, scientists, inventors, and entrepreneurs worldwide, many here in the United States, speaks volumes about Armenian national priorities and values.

We are a nation of builders, not destroyers. We are a people of great Christian faith who have made the ultimate sacrifice for our beliefs, most notably the estimated 1.5 million victims of the 1915 Armenian Genocide. And, we are a people of indomitable resilience, when one considers the extent of tragedies and traumas we have endured as an ancient nation—despite the missed opportunities of our foreign friends to take decisive action to protect us from aggressors and oppressors who seem to view our peace-loving values as our vulnerability.

The entire Armenian world recognizes this pivotal moment. Our waking nightmare is that history will repeat itself and those with the power and influence to shape history will not act decisively or swiftly enough to save us from this existential threat. The protection of Armenia should not be a geopolitical consideration or a political calculation, but rather a moral imperative. And temporary ceasefires are never the solution when one of the parties refuses to play by the rules.

In these divisive times in human history, the entire world is watching to see if democracy and freedom will prevail over autocracy and oppression. Let saving a free, independent, democratic Armenia be part of the answer.

As president of the Armenian General Benevolent Union (AGBU), the world’s largest Armenian non-profit organization, I speak for a global network of hundreds of thousands of Armenians across five continents. A large majority are Armenian-Americans who serve in all spheres of government, industry and commerce nationwide. As such, I appeal to the United States of America and its allies to deploy all its diplomatic might and punitive tools to hold Azerbaijan accountable for its actions and put an end to its designs for regional dominance at the expense of sovereign, democratic Armenia.

Many thanks for your immediate attention to this urgent appeal. 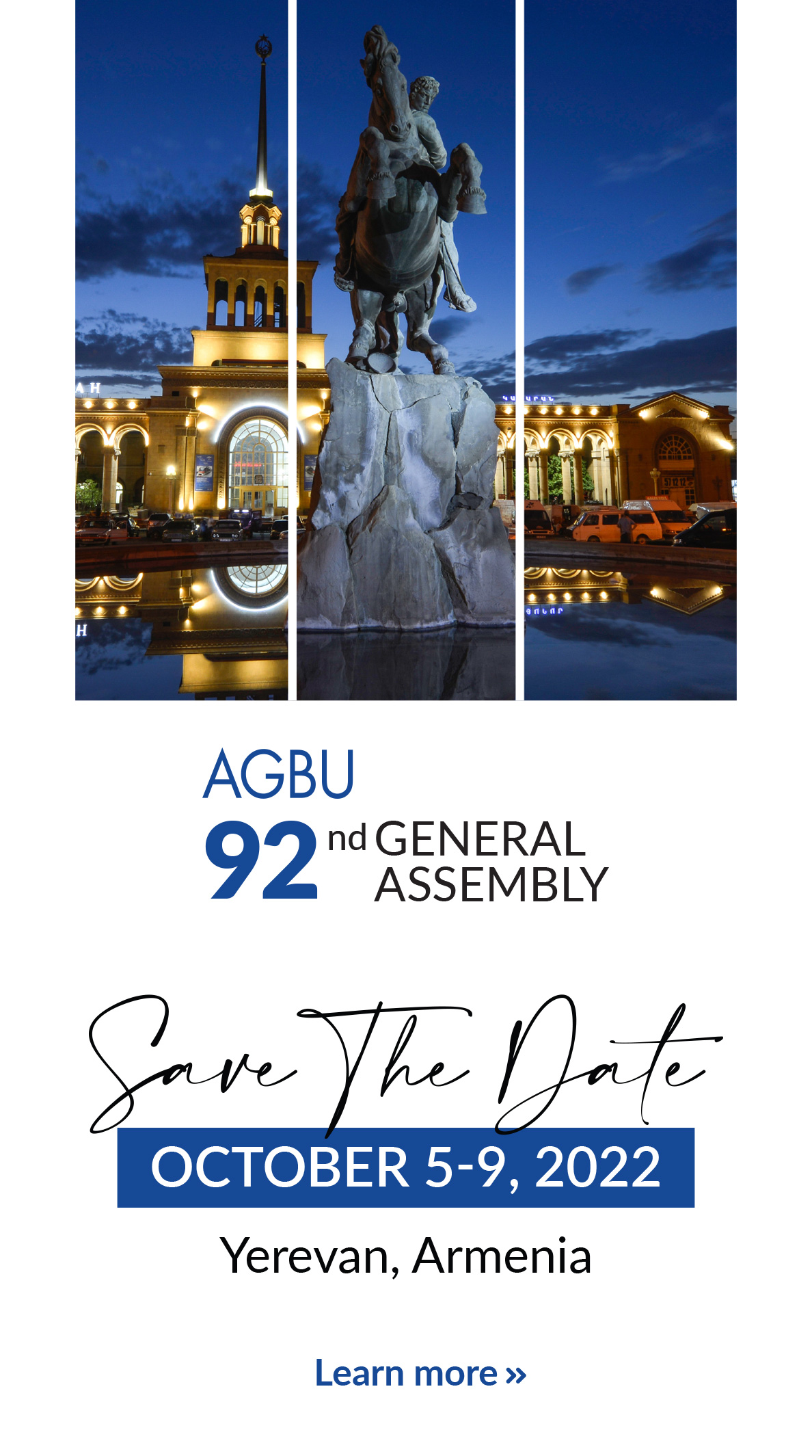 Save the date for GA

Features From Our Magazines

Unlikely global icons and celebrities who have visited Armenia
END_OF_DOCUMENT_TOKEN_TO_BE_REPLACED

A Prince Among Queens

How Armenian Jazz improvised its way onto the world stage
END_OF_DOCUMENT_TOKEN_TO_BE_REPLACED

Heartbeat of the Western Armenian World

The many colors and complexities of Lebanese Armenian life
END_OF_DOCUMENT_TOKEN_TO_BE_REPLACED

A Salute to Independence

Little Hearts of Black and Blue

A Moment in Time

The Armenians of Lebanon

A century of adaptation to the shifting winds of history
END_OF_DOCUMENT_TOKEN_TO_BE_REPLACED

Make an impact that will change lives. Donate today.